Today, Microsoft announced the release of Visual Studio 2013 March 2013 Update which have additional features, project types and support for some of the enhancements that comes with Office 2013 SP1 and Office 365. So if you’re a developer targeting Office 365, Office 2013 or SharePoint Server 2013 it may be a good idea to go grab the update and install it now.

As quoted from the Visual Studio blog:

While this may seem like a trivial update, I know this is a popular requirement from a lot of my clients. I don’t think this is the last data source type we’ll see in the list of available types, which is ever growing:

One of the cool features, which I lacked in one of my CBA projects in the past, is the integration of native controls for managing documents in a library that your CBA is connected to. With the latest update, you get the ability to create new documents in your library from the CBA interface.

[blockquote]When you attach your application to a SharePoint host-web document library, the application will be integrated with a set of new document controls, which allows your users to create new Office documents (either blank documents or from document templates that are available in the attached document library), open documents in Office Web App or Office client, and upload existing documents. All of these are provided by the tools without requiring any extra coding from you.[/blockquote] 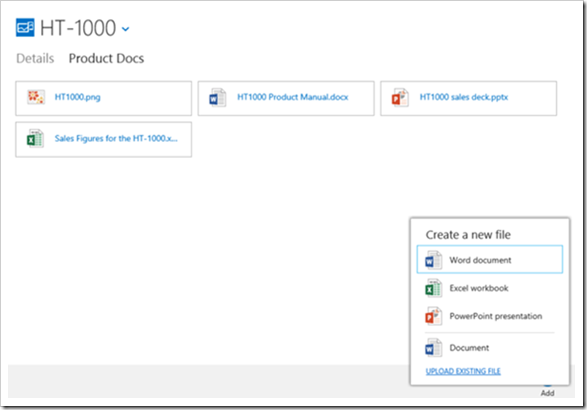 Picture from blogs.msdn.com, as per the article mentioned in the introduction.

To add such a control and work with these types of controls, you simply have a new option here in the CBA Screen design interface:

Some of the additions to the Office App development toolset are mentioned:

There’s some additions to the experiences for developers when creating SharePoint Apps.

With the latest release of the tools, we now can switch the App project to target Office 365 or target an on-premises installation of SharePoint. It’s a new property in the SharePoint project settings dialog:

Another pretty neat thing is the support for MVP in client web parts:

I’ve been trying these things out really quick now, and I must say the small but constant flow of enhancements and additions with the new update cadence for all Microsoft products is pretty impressive. Visual Studio 2013 hasn’t been around for that long, but we’re still seeing new updates being published frequently. It is easier than ever to keep up with new development techniques and tools, and no need for exhausting waiting periods.