This post will be an introduction to how you get up and running quickly with building a node.js API which runs through Express on node.js and communicates with a deployed MongoDB database, using TypeScript. Simply put: a MEAN stack application with typings. Oh, except Angular. Since I'm not building a UI yet, this post only has MEN out of the MEAN.

There's plenty of ways to get up and running quickly with the MEAN stack. There's plentyful of yeoman generators available online. In this post however, we'll build a very simple API from scratch in order to see how easy it is.

I live in the Microsoft space a lot. Actually, every day for the last 15 years. That means I've got to play with Azure quite a lot. It's extremely powerful, versatile and secure. There's a tonne of features we use daily in a lot of our projects, services and deployments. But sometimes you want to check out the competition and alternatives. One of those in the app hosting space is Heroku. After using it with a few sparetime projects on various depths, I must say I'm intrigued to see what more it has to offer.

Looking for the source code? Find it in the Summary-section in the bottom of this post.

A brief story about Heroku!

Heroku is a cloud platform based on a managed container system, with integrated data services and a powerful ecosystem, for deploying and running modern apps. The Heroku developer experience is an app-centric approach for software delivery, integrated with today’s most popular developer tools and workflows. - heroku.com

It comes with a pretty slick dashboard, making the management of your services a treat. In this post howerver, I'll mostly use the CLI (Command Line Interface). 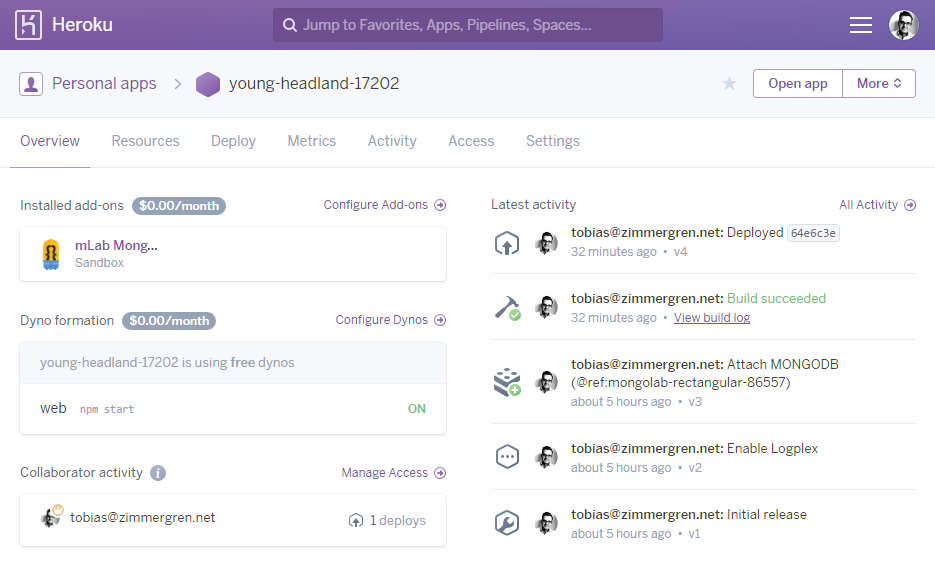 Check out the Heroku services and docs on Heroku.com

In order to demonstrate the simplicity of this type of project and hosting it with Heroku, I'll just init a simple new npm project file and build our simple API as we go.

Before we begin though, please make sure that you initiate git repository for this project, as you can the fully and flexibly deploy all your magic to Heroku with a simple git push. (You can also configure Heroku to pull latest changes from any branch you want, as they come in..).

So either do a git init or setup a new repo any way you feel preferable.

Modify your generated package.json to look something like below, with these notes:

Congrats, you have an awesome looking file right there! Moving on.

We've got our package.json file fully prepped with the dependencies we need. Now we'll just run the following command to see the project dependencies be pulled down into the node_modules folder.

At this point we should be ready to start setting things in Heroku up too.

A pre-requisite for this to work, is of course that you have an account with Heroku. They're free to start out with. Get one here signup.heroku.com if you don't already have one. Once you've signed up for a free account you're good to continue.

Whether you're on a Mac, Windows or Linux, there's a CLI available.

Head on over here: heroku CLI download and select the installer you're looking for, and install it. Once done, keep reading and we'll get this rocket flying!

Once installed, you can run the following command to make sure you're correctly set up.

Once logged in you should see a confirmation similar to the one below:

Run the following command to create a new Heroku app:

As you can see from the output, Heroku generates a unique subdomain for you based on a three-word combination (word1-word2-numbers). This will be the home of your heroku app. Simple as that.

We're developing a simple node.js api, hence we'll need to tell Heroku that we want to use nodejs. Run the following command:

Since we're going to host our data somewhere, preferably in the Heroku app, we can do this by creating a MongoDB instance to it like below:

The output should confirm your created database:

At this point we have everything in Heroku configured as we need it to start building our app/API.

Since I want to build this application using TypeScript, I will create a new index.ts file. This will then generate a new index.js file once transpiling, which is the starting point of our app (remember we set this early in this post, in the package.json configuration).

In order for TypeScript to work, we need to install some typings. This can be done in several ways. I'm keeping it simple.

Create a new file called typings.json and populate it with this:

In order for the typings to be installed in your project, simply run:

At this point we're all set to start developing our TypeScript application, and later deploy it to Heroku and store the data we produce in the MongoDB database.

This project will be a demo of how to build a simple API, and since we're using TypeScript we want to define some typings for the model.

In my case I'm sticking to a traditional Quotes demo, which will allow us to get, post, put, update and delete quotes in our database.

Create a new tsconfig.json file which will define the TypeScript project settings.

My default tsconfig.json file normally looks like this before any other custom changes are added:

Create the quote.ts file. Mine is located in a folder called entities, as such: 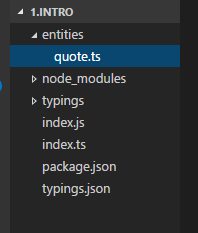 The contents of this file is this:

We're firstly telling the file to use the mongoose module, which is how we communicate with the MondoDB in a slick way.

I'm defining an interface called IQuote, and an IQuoteModel interface that implements the IQuote interface and extends the mongoose.Document{[}} which is required to get the benefits of the mongoose model.

If you're new to Mongoose, don't worry - read more about it here.

Create a new file called index.ts.
This will be the entry-point for your app, as we defined in the package.json file in the beginning of this post.

In order for us to complete this code, we first need to import the references we need in our code. Add this to the index.ts file:

You can do this a number of ways. Keeping it aligned with the other simple examples, add these variables after your import statements:

Below the previous code block, add this:

If you're not familiar with Express, check it out here

Define the REST API for the Quotes model

In order to support a full CRUD operation in the REST API, I've decided to use something called restful. Using this, we can define the allowed and supported REST operations without any hassle at all. It reduces the overhead of writing your own endpoints.

Add this code below the previous code block:

I'm creating a new restful model called quote which is based on the Quote.schema. I'm adding the get, post, put and delete methods to the restful model. I'm hooking it up to the express app on the following endpoint: /api/quote.

As mentioned previously I wanted to use mongoose instead of working directly with mongodb. Add this one-liner to connect to the database. The connection string used is the one we defined earlier.

The final piece here is to get the server up and running so it will host our app. Add this code block after the previous one:

Make sure it transpiles into javascript!

First, if you haven't done so, run npm install to make sure everything in the definitions is installed. Then just run this:

This should transpile your code into .js files and that'll be that.
Done.

Of course there's more convenient ways to do this. One being a gulp task, but let's save that for another time.

Step 4: Verify that your app works!

You can either run it using npm start, or as I want to do it run this:

My app is hosted on port 5000 so my url for the full endpoint is http://localhost:5000/api/quote. I will use Postman to test my api easily.

Launch Postman (I'm using the aforementioned Postman extension for Chome which I love). 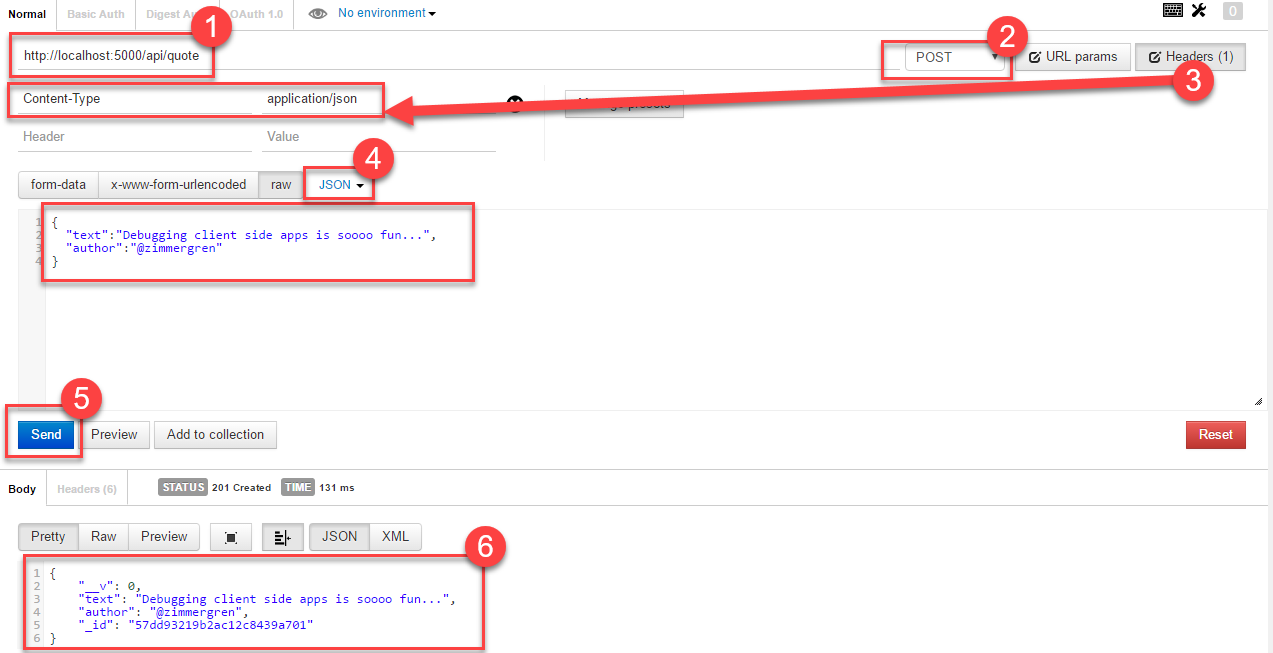 At this point I would assume it's pretty self explanatory how you could retrieve the items from your api as well. Using postman you'll simply change to a GET request instead.

For the sake of brevity I'll skip showing each method through postman, since the same principles apply to all operations.

Well, it's been a blast so far. Let's see if we can continue some of the fun by throwing this guy up into the cloud in the Heroku hosted services.

In the previous steps we've already seen how we create our Heroku app, hook up a mongodb database and written our TypeScript-powered nodejs/express api app.

Time to get it published to Heroku.

Add the changes to your git repo

In order to enable us to publish in the (I believe) easiest way possible, you'll run the following git commands and then you're done.

First, add any files and changes in the repo.

Next, I'm committing with a message...

Push your branch to Heroku

At this point, you can choose whether or not you want to push the committes changes to your own repository. But whether you do that or not (obviously I'd recommend you to do that so you're safe...), you can now publish the committed changes to Heroku. From Git cmdline.

The pre-requirements for this is of course that you're logged in to the Heroku CLI etc, as described earlier in this article.

Verify that it's in the cloud

You can simply run this command to automatically launch your browser, targeting your published heroku app:

Thanks for bearing with me all the way to the end. Lovely.

Also consider that in this post I haven't even touched Authentication and other highly prioritized topics. This post is meant as a guide and reminder to get up and running quickly, especially if you're into TypeScript and want to throw your mongodb/node.js/express app up in the cloud quickly and effortlessly.

Feel free to drop me a few comments below :-)